A TRIBUTE TO DAVID 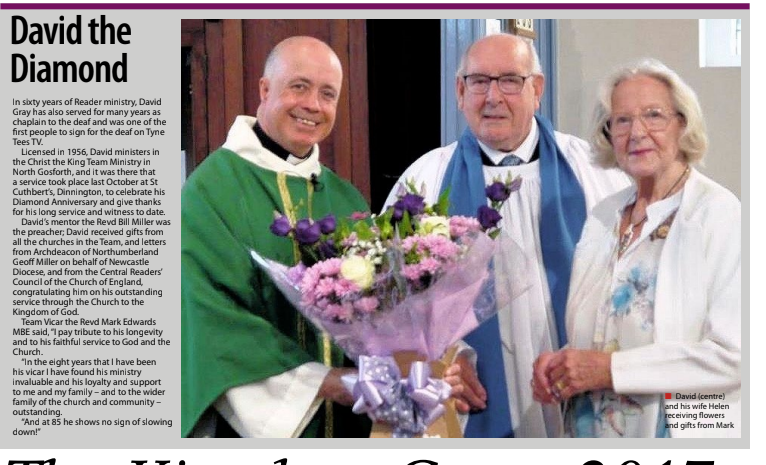 Following the sudden death of our much loved Reader David Gray on 3rd February Reverend Mark has penned the following tribute to David which will be published in the Link.

DAVID was a Christian of unwavering faith.
He loved the Lord and found strength through his faith and through the church which had been his
Spiritual home for decades. Serving as a Christian minister for over 65 years and at 88 still going strong in the Lord, preaching, teaching, house communions (before lockdown) sending out his weekly mediations to over 50 people. He never stopped.

As a Christian, death for David held no fear. He was certain of the resurrection to eternal life,
Confident in the knowledge that when he died, his soul, his spirit would go home to be with the Lord.
He faced his cancer with courage and made it quite clear that he was not going to have any
Investigative intrusive treatment.

His death has come as a huge shock to us all, but David has departed this life the way he would have wanted to, still in the service of his Lord. For David what can I say but as the reward of his faith he is with his Lord. What can be better than that?

I had the privilege and honour of sharing in ministry with David for 13 years; he was as I often described him my right-hand-man. My lay reader and for the last two years my church warden.
His portfolio is impressive. Chaplain to the deaf, pioneer in that he was the first person to sign for the deaf on Tyne Tees Television, lay reader for over 65 years, and church warden. Although he
couldn’t read music, he was an accomplished musician who learned to play the organ by sound.
His support of myself and my family and the church has been unwavering: such kindness, such
Generosity and affirmation, such grace. He touched the lives of many people with his ministry, some who have themselves entered the ministry because of David.
When I first came to Newcastle from Barrow-in-Furness in 2008, he gave me confidence, he inspired me. I grew in ministry and in stature because of David’s affirmation, support, kindness, prayers and love. His ministry to me, and faithful serving of the church and wider community for 65 years is priceless.